DELTA XI PHI sorority was founded April 20th, 1994 on the University of Illinois at Urbana – Champaign campus, by fifteen young women. These women recognized a need for an organization that appreciated the different cultures present on their college campuses. Multi-cultural awareness, as well as community service, the empowerment of women in higher education, friendship and sisterhood were also important aspects of DELTA XI PHI.

In the spring of 1992, two different groups of women who were seeking to establish a new sorority at “UIUC” learned of each other’s intentions. The two groups organized a meeting where they discussed their goals and aspirations. They surprisingly overlapped and so these women unanimously decided to work together toward their common goal and the two groups merged.They decided to temporarily call themselves “Women for the Advancement of a Multi-cultural Society (WAMS). Several sororities on other college campuses were contacted with the intention of establishing a chapter at the U of I campus . However, none of those had everything that was wanted by the “WAMS”.

Finally, on April 20th, 1993, after almost a year of searching for a sorority and much frustration, the women of WAMS made a decision to stop looking for other sororities and to commence their quest of founding their own. Three women from WAMS were designated pledge educators and helped the other twelve women’s dream of founding a sorority become a reality. They went through a year-long pledging process during which they developed a strong bond of sisterhood.

The foundation of their sorority began with meetings where they discussed and voted upon its letters, colors, mascot, flower, and stone. On April 20, 1994 the members of WAMS were no longer just the women of WAMS, they were to be forever known as the founding mothers of DELTA XI PHI Sorority. (History recorded by Founding Mother Elia Morales) On February 6th, 1998, Delta Xi Phi Sorority became an incorporated entity and changed its name to be read: Delta Xi Phi Multicultural Sorority, Inc. In this way, all may know for that which we stand. 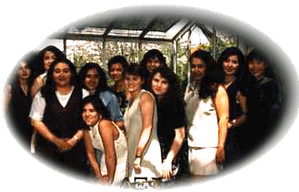